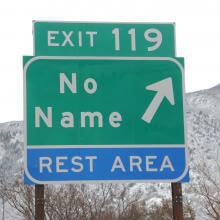 So how did this Glenwood Canyon hamlet get its oddball moniker? There are several stories, but the most widely accepted one is that the state sent out questionnaires about the town’s name to the villagers. The majority of inhabitants wrote “No Name” under the section labeled Name of Town. The state took them at their word and officially recorded “No Name” into the state records, sealing the town’s fate. Despite attempts to change it, the name stuck.

As a result, the town named for being nameless has given more than a few travelers passing by cause to chuckle. It was listed as one of 15 of the Weirdest Town Names in America and World’s Funniest Town Names.

Find out more about Glenwood Springs and the surrounding area at visitglenwood.com. In the Spotlight: 9 Movies That Were Filmed in Glenwood Springs
Scroll to top